look at the most favourites boat

here You can find the new boat

Look at our friendly sites: 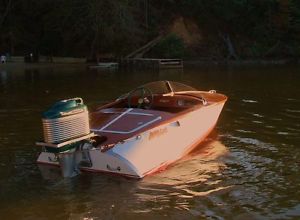 Back to the main page Back to category Runabouts

You are bidding on a 1954 Aristocraft 13 foot Torpedo. These are somewhat rare and I have only found 2 or 3 since restoring this boat. It is an early torpedo. The Aristocraft factory later put a raised deck and hood scoop on in 1955 They also added a foot and a half to the length. I believe this earlier model is a cleaner and more attractive boat. It is an important link in boat design in the 50's.The black and white photo in the listing is from the aristocraft history webpage. The picture of the boat in the water is from 2011. The others are just taken.  The hardware is correct. In fact the windshield brackets are found only on this model. The name Aristocraft looks like it has been hand routed. The windshield has less of a rake than the later 55 boats. It is a solid boat that needs a cosmetic going over. The serial number tags were missing and I got a new one from the factory . Based on discussions with the Aristocraft factory the date of 1954 came up. The deck has several varnish blisters and lifts and the it needs new decals. Please refer to the photos for areas that need attention. The boat was completely restored and has won several ACBS best boat and craftsmanship awards. The boat has won both the craftsmanship award and the ACBS best outboard boat at St. Michaels MD and Smith Mountain Lake VA. The Motor has won best ACBS outboard award. It is very solid and has no rot. The hull has been vacuum bagged with west epoxy using 4 oz. cloth on the sides and 6 oz on the bottom. It carries an early 1955 mark 55E outboard that has been re-restored recently with no hours in the water. The mark 55 is an electric start but I have never hooked it up for that. It is a good motor for the boat and is easy to manually start. It is unique in that it is an early Mark 55 and has its original bracket screws. The handles are green,not black. In the early numbers mercury used parts from the Mark 50. The motor has recently been painted. It also had coil,points, and condenser replaced, New gaskets etc. Tower also is freshly painted. I haven't started it. The lower unit was rebuilt in 2011 and turns freely. Although not pictured it comes with the motor. The green hand screws are one of these. The trailer is a mid-50's Mastercraft that had new axles new spring and sandblasted ,epoxied and painted. All hardware is there. The first picture shown is what the boat looked like when just restored in the water. It wouldn't be hard to get her back there I would recommend the following:
-Replace windshield and rubber gasket(lexan and rubber gasket material are included in sale)-Place new decals on hull(available online or from the Aristocraft Factory-Re-varnish deck-Re-paint green floor boards
-Paint Trailer(almond Rustoleum)-Sand and re-varnish inside of transom-connect some wires to the starter The boat and motor is sold as is and where isAny questions are welcomeThank youOn Jun-23-17 at 09:16:53 PDT, seller added the following information:I have added some photos that might help. The fuel tank is mint but is a show tank as I didnt restore the insides. Its in good shape. As stated the lower unit spins and shifts freely Has a new impeller with it. The electric start cable is new with a NOS connector. I have never hooked it up. The two picture boards we used to show the boat and they show the progression of the restoration. I forgot I had the seat cushion upstairs and that is shown. Also as stated are two pieces of Lexan for new windshield(use the old ones as patterns) The gasket moulding is pictured in the box. One pic shows the inside of the transom. There is no rot. The bilge stringers go through the transom cleat and stop at the plywood transom. Al wood has been soaked and glued with West Epoxy as has the bottom. The transom is 3/4" the transom cleat is 34" and an additional 78" quarter round that you cannot see gives the sides of the hull and bottom 2 1/4" bearing and fastening space to connect the sides/bottom to the transom--very strong. I would coat the bottom transom cleat with epoxy and tape and paint with the red bilge paint--it holds up well in a water environment- better than varnish.